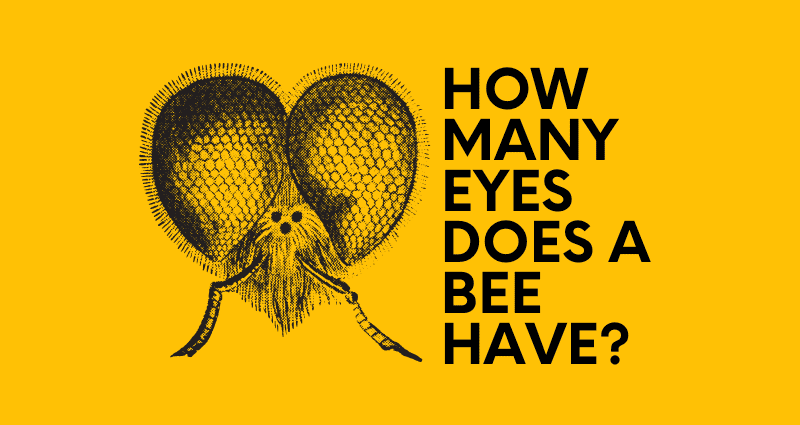 Bee’s are excellent pollinators and produce delicious honey. But those aren’t the only interesting thing about them!

Their unique bodies have fascinated us for years. In this post, we’ll look into bee eyes and how they help the bees do their essential jobs.

How Many Eyes Does A Bee Have?

Bees have three eyes at the center of their heads. These eyes look like small black dots.

The ocelli, or simple eyes, use one lens with several sensory cells. The ocelli eyes comprise one central ocellus and two dorsal ocelli eyes in a triangular form.

They can detect light, but not shapes. They also help bees detect danger coming from above their heads.

From a distance, the shiny black shade is visible and dissimilar from the face color.

The compound eyes help the bees see ultraviolet markers of the flowers that store the nectar they’re on the hunt for.

Fun Fact: Besides bees, dragonflies, wasps, and grasshoppers, all have 5 eyes as well.

What Are Compound Eyes?

The large globe-like eyes are called compound eyes, each with thousands of tiny facets called ommatidium. These macro lenses placed in all angles help the bee detect different plants and their patterns.

Apart from that, it can spot other bees, pick any movement and color.

Moreover, compound eyes see ultraviolet light that is not visible to humans. Now you know how a bee selects specific flowers for nectar using its compound eyes.

What Do Bees See?

Despite their small size, bumblebees have remarkable eyesight. Hence, they view things through a different light spectrum from humans. For them to hunt for relevant flowers, bee vision is incredibly powerful thanks to their multiple lenses and senses.

What do bees see? They see shades with a wavelength range of 300 to 650 nm (nanometers). In scientific theory, it means viewing through the ultraviolet spectrum.

Bees can see the color red faster than people can. Also, with their mighty excellent talent, they can view edges and notice dark or light.

Unlike other insects, bees have the gift to recognize shades like humans. Thus, apart from green, blue, they can see ultraviolet light.

To understand how bees see color, researchers did a behavior study by displaying water and sugar concentration in bee feeders in various colors like gray and yellow.

The bees connected the yellow with food. This habit continued even after the removal of the targets. Hence, the bees reacted to the yellow shade, unlike the gray one. Their view occurs in a reddish wavelength combination of the three shades.

So, do bees see color? Yes, bees can see primary hues, including:

For example, they see a blue-green or yellow and ultraviolet end of the light spectrum, the bee’s purple. Unlike humans, they have no photoreceptor in the retina to react to red light.

On top of their eyesight, bees can sense the slight negative electric charge that is common among fields of flowers.

What’s more, is that these opposing electric charges also help pollen jump onto the bee when collecting nectar.

Unfortunately, scientists haven’t been able to explain how the bees are able to sense these electric charges.

How Does Bee Hair Help Them See?

Besides having five eyes, honey bees are quite hairy. They’re covered from their tongue, legs, bodies, eyes, and more.

The tiny hairs on the compound bee eyes have exclusive spacing from the legs. First, they protect the inner part from the extra pollen in pollen baskets. Second, they aid in carrying excess pollen.

The primary reason for the hair on the eyes is to brush off any extra pollen covering the eyes.

On top of that, their hair helps them sense wind direction, giving them a sense of speed and spatial orientation they need to maneuver.

Unlike you, a bee can detect polarized light and pick the suitable nectar for honey. The bee’s compound and simple eyes have powerful individual lenses and senses to guide them from dawn to dusk.

Hence, the five eyes coordinate to help the bee move around safely and productively.

It seems as though everything in a bee’s life is about coordination.

For more information and diagrams of honeybee anatomy, click here.