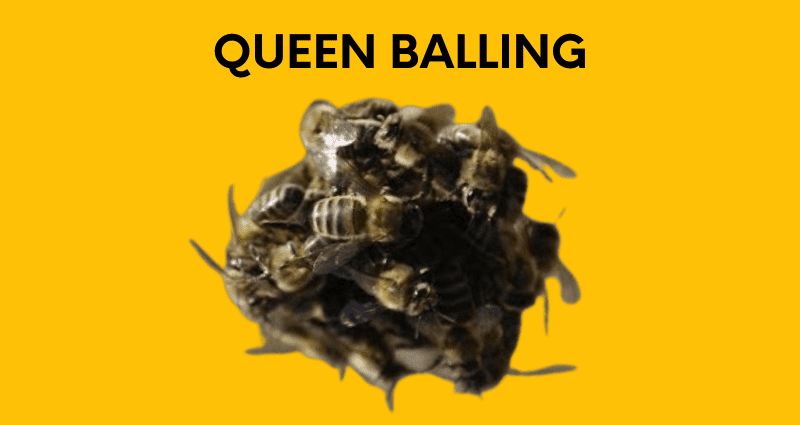 Eusocial insects, like bees, are considered insects with the highest level of intelligence. They show coordinated care, cooperative food gathering, and preparation. This natural world has a power hierarchy. The one on top of the power pyramid is – the queen bee – the all-powerful overlord of the hive full of thousands of worker bees.

But does the beehive serve the queen in every case? Is the queen bee all-powerful?

She isn’t. The hive is more like a democracy than a dictatorship. Balling behavior can be seen in a hive where the queen is being replaced.

Today we’ll learn why bees decide to replace their queen, how they do it, and how they find a replacement.

The Purpose Of The Queen Bee

Literally and figuratively, the queen is the most significant power in the hive. The one with the most extended lifespan (can live up to 6 years) and the biggest one in the hive. But, her role is a vital one, not an authoritarian one.

Her sole job is to lay eggs – all day, every day. She is no ruler. She doesn’t control the hive in any overt way. But, she still is the hive’s center because she sways the hive with the pheromones she releases.

The rest of the bees are worker bees and drone bees. The female worker bees aren’t sexually developed. Only the queen bee can reproduce with the drones. The queen only mates once – and keeps the sperm inside her for the rest of her life. She’ll fertilize eggs per her wish and control the number of bees in the hive.

Why Bees Reject A Queen

There are a few reasons the bees might reject the queen.

As we said previously, the queen only mates once in her life and carries the sperm inside her for the rest of her days. As the mated queen grows older, the sperm inside her will keep decreasing. At the end of her life, the hive detects this shortage because of the decrease in pheromones she sends out.

Female bees, like humans, are diploids. The males are haploids. When the queen starts producing diploid males (drones usually are haploid), typically sterile, these are formed when a diploid (a female bee) bee’s body is fooled into becoming male. This is a disaster for a colony’s survival – these diploids consume resources, can’t reproduce – and refuse to work.

This happens when the queen mates with a drone that contains the CSD (complementary sex determination) gene. Half the queen’s offspring are born useless when this happens, essentially halving the next generation’s workforce.

The hive can tell whenever a queen begins producing sterile bees because they have a particular smell. The existing worker bees won’t be too pleased with that and know what must be done.

This happens more in apiaries. Older worker bees don’t fancy the idea of a new, unfamiliar queen – they see her as an invader. Bees are born and raised in the hive itself. Even if there’s no queen in the hive, they usually don’t take the scent of a foreign queen nicely.

This situation arises when beekeepers physically replace queens with queen cells themselves. And the bees aren’t happy with this replacement.

The worker bees will dispose of the queen through this non-violent but lethal technique.

They do it by surrounding the queen in a tight cluster of bees, holding the queen still with their legs, and balling the queen. The mob creates heat that raises the queen’s temperature to where she overheats and dies.

It’s not physically violent, but it gets the work done. The queen receives disposed of nice and simple.

How Is A New Queen Bee Selected?

Once the queen is removed, a new one needs to be made. Unless a beekeeper intervenes, the new queen will come from the old queen’s fertilized eggs. Unfertilized eggs become drones, but the fertilized ones produce workers or future queens.

The queen is fed a particular type of honey called the royal jelly (the rest of the hive eats normal honey) in the queen cup, where the queen’s larva develops. It’s provided with everything it needs to grow big. But, the hive feeds several potential queens to make sure they get the best queen.

The first one to hatch out will kill all other larvas and consume them for nutrients. If two hatch simultaneously, they’ll fight to the death. Unlike honey bees, the queen’s stinger doesn’t sting isn’t fatal to herself. She’ll use it to kill her competition and take the throne. Then the virgin queen will mate with the drones and begin her duties.

In rare cases, a potential queen bee who hatches first decides to form a swarm with some of the lingering bees and flies away to build a new hive. Most who hatch first usually take over their native hive.

What If You Remove The Queen Bee?

The bees can tell in a few hours if the queen goes missing because the queen pheromones the queen secreted are no longer there. Their antennae can smell something wrong. They’ll get stressed and restless and begin the procedure to requeen.

What Happens To A Queenless Colony?

Queenless colonies can exist for a while – but they are doomed. Without the queen, there’s no way the hive will survive in the wild. Worker bees will die in a matter of months. The existing worker bees must produce a new queen bee to further the population. Otherwise, the hive will perish.