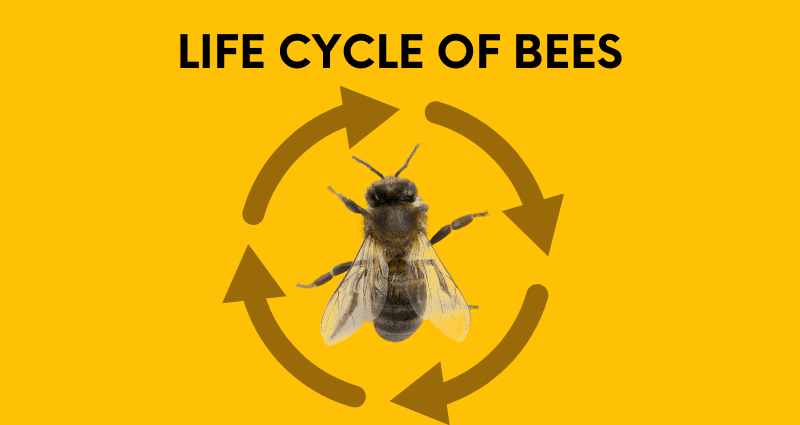 How Long Do Bees Live?

The bee life cycle is relatively short when compared to our own. But their lives are purposeful and productive as they pollinate plants and prepare the hive for the future. Within every colony, bees operate in three castes: queen, worker, and drone bees, each with different roles.

In a colony of bees, 99% are female worker bees who undertake the pollination; the remainder includes one queen who lays eggs to populate the colony and supply the labor force and a few hundred male drones who have the sole function of servicing the queen to fertilize eggs.

Outside factors that influence the bee life cycle are habitat, climate, parasites, pesticides, and predators. Still, a colony of bees can exist for years, even though the roster of residents will change frequently.

Generally, a honey bee colony has a longer average lifespan than a bumblebee colony. If the hive becomes too crowded, a new queen may take a swarm of bees to a new location to form a new colony.

Stages Of The Honeybees Life

Even though any bee’s life varies by caste, the four key stages are of the honey bee life cycle are:

The queen will lay each egg in a single cell in the honeycomb, which will hatch after about three days to become part of a brood of baby bees.

In hobby hives and commercial beekeeping operations, the queen’s honeycomb is located in the brood box, a separate chamber for the queen to live, eat, and lay eggs.

Why do the eggs come from the queen when the hive consists of female worker bees? Female bees usually develop no ovaries due to chemicals known as brood recognition pheromones.

However, in some colonies, a small percentage (1%) of females develop ovaries that allow them to lay unfertilized eggs. When these bees, known as “laying worker bees,” produce eggs, they may deposit multiple eggs in a single honeycomb cell.

While the queen, who has a longer body, lays one egg at the bottom of a cell, the laying bees have shorter abdomens that cannot reach the cell bottom so that they may deposit eggs on the side of the cell or off-center. Before these eggs hatch, other worker bees may remove them.

Laying worker bees only lay a few eggs in colonies with a functioning queen.

In three days, each egg hatches into a larva which appears like a small white grub that is blind and legless. Young worker nurse bees provide nutrition to the tiny larvae with jelly made in glands in the head and the salivary glands in the mouth.

At first, the entire brood feasts on royal jelly, the food of queens that contains water, protein, vitamins, fats (lipids), sugar, and some mineral salts.

The queen larvae continue to dine on royal jelly until they become queen bees, but after a few days, the food changes to meet the particular needs of workers and drones.

Worker bee jelly, for example, is a blend of honey and pollen (bee bread) that contains less protein and more carbohydrates.

By the time the larvae are five days old, they are 1,500 times their size at birth and have shed their skin several times. Nurse bees cap the cells with wax, and the larva spins a cocoon around itself as it enters the pupal stage.

The queen bees have a shorter larval period, while drones have the longest.

During the pupa stage, the larva begins to look like an adult bee as its legs, eyes, and wings develop and hairs cover its body.

Depending on the type of bee, the now-adult bee chews its way out of the cell within seven to 14 days to pursue its work as an adult bee. This stage is shorter for the queen, longer for the worker bees, and longest for the drones.

The journey from egg to adult takes 16 days for the queen, 21 days for workers, and 24 days for drones.

Once they are born, both their jobs and their lifespan are defined.

Queen bees will often live for over a year, often up to five years, depending on their ability to produce a sustainable colony.

The primary duty of the queen is to lay eggs and build a strong workforce. The queen bee lays fertilized eggs that develop into female worker bees and unfertilized eggs that grow to become male bees or drones. There is only one queen in the entire colony.

The queen, well-nourished by royal jelly, takes the shortest time to mature from the larva stage -specifically, five days from larva to pupa and then eight days to develop into an adult. When the virgin queen emerges, she is not fertile and requires around seven days to be ready for mating.

A queen lives longer than the other castes because she functions inside the hive, which preserves her body parts from wearing out quickly, like her wings and other parts. She can survive for two or more, even up to five years.

The queen’s pheromone production and egg-laying ability decline with aging. Once the worker bees note a weakening queen, they nurture a new queen and eliminate the old queen using a process called Queen Balling.

Beekeepers keep track of the queen’s age by painting a small dot on her thorax and may replace the old queen yearly or after two years. Purchasing a new queen bee can cost as little as $25, but as much as $200.

How Long Do Worker Bees Live?

Worker bees range in tens of thousands in a hive and do most of the work, including defending the beehive.

They take longer to transform in the larva and pupa stages than the queens, and after maturing, they spend their first weeks working in the hive before working outside collecting nectar and pollen. They will sting when they sense invasion.

Worker bees existing during spring or summer have the most work to do, which wears them out quickly. They build the honeycomb, feed larvae, store nectar, produce honey, and forage for food. These worker bees live for a short period, usually forty to sixty days.

The worker bees that emerge during the autumn time of year survive for a more extended period because of reduced work. The queen quits laying eggs; therefore, there is no brood to support.

The workers clump around the queen to be warm throughout the winter period. Such bees can live up to six months. When spring comes, any survivors once again forage for pollen.

How Long Do Drone Bees Live?

Male drones take the longest to become adults. Their role is purely for reproduction purposes as they do not work apart from looking for virgin queens to mate. Mating happens away from the hive to reduce the chances of mating with their mother queen.

Drones die shortly after a successful mating flight because the mating rips off their reproductive organs. Their life span ranges from 38 days until they mate.

If the mating flight is unsuccessful and the fall season approaches, worker bees drive out drones from the hive to prevent feeding them over the winter months. Ultimately, they do not survive the coming low temperatures and hunger.

Aside from pesticides and weather, bee colonies are subject to diseases, especially during their development phase. While the condition can affect any beehive, beekeepers are particularly attentive to diseases and parasites that affect the honey bee colonies, especially the members in the larva stage.

As the bee brood progresses from egg to pupae, beekeepers should regularly monitor beehives to safeguard their health and ensure a perennial honeybee (Apis mellifera) lifecycle.

Here are a few diseases that affect the lifespan of honeybees and concern beekeepers:

Sacbrood is a bee virus affecting honeybee species globally that often appears in early spring colonies having a poor brood arrangement. The virus spreads from infected nurse bees to bee larva during feeding.

The infected larva fails to pupate and dies in the capped brood cells. The larva dies gradually by changing color from grey to dark brown for uncapped cells.

Adult bees remove the dead larva to prevent the spread of the disease. These bees do not show symptoms of the virus, but high infection rates may reduce their lifespans and weaken the colony.

AFB caused by the bacteria Paenibacillus larvae is the most severe and fatal bacterial infection in an apiary. It is resilient to harsh weather and can persevere in used honeycombs and wood stuff for years. Beekeepers should avoid previously owned beekeeping kits.

Nurse bees spread the bacteria by contaminating the larval food. After capping the brood cells, the larva dies. The infection weakens an apiary, and stronger colonies rob weaker ones, spreading the disease quickly to other beehives. High infection rates can kill the whole apiary.

You can confirm AFB by conducting a “ropiness” test, and since there is no cure for the disease, you need to destroy the infected hives by burning them on site.

Bacteria Melissococcus Plutonius causes EFB. Though the disease is not lethal as AFB, it is highly infectious. Only young larva are susceptible to EFB after nurse bees fortuitously transfer the bacteria to the brood food.

The bacteria kills the larva before capping; beekeepers can detect early infections by inspecting the brood nest.

Beehives may appear healthy when the bacteria are dormant and visible when the colony is straining to keep up with the infection.

Symptoms of the disease are:

A colony infected with a mild EFB can recover from the disease, so the hive’s destruction is not required as with AFB.